Shelf life is subjective.   The definition of “use by” or “sell by” date depends on criteria and varying degrees of emphasis.   These dates are understandably conservative. 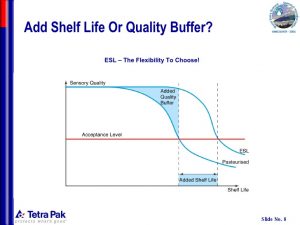 Let’s look at both the judging criteria and interdependent factors affecting shelf life.

The judging criteria are:

odor and taste      appearance      texture
Obviously the most common sense must-haves for consumer satisfaction, these criteria do not pick up on other factors which have the potential to sicken or kill the customer.

weight loss
Package must not dissipate moisture to comply with weight and measures.

micro loads
Micro loads are the most critical criterion whether it’s fresh, refrigerated or frozen.   Judging by total micro load is an oversimplification and puts the processor in an impossible position.  Something is going to grow on the surface of the product, either friendly aerobic ( in the presence of oxygen ) or anaerobic ( no oxygen present ).   It’s a zero sum game microbiologists call competition.  The battle between these types of bacteria dates back to pre-Cambrian times.  Aerobic = good, friendly.  Anaerobic = bad.  Anaerobic is where emerging pathogens such as shigella, campylobacter jejuni and classic clostridium botulinum thrive.  What’s scary is listeria mycocytogenes  grows in both conditions and is undetectable to odor and taste.  A bag of salad which has been stored at 38 degrees for 25 days may look good, feel crunchy and taste fine while fraught with stealth populations of listeria.  You think frozen food is exempt ?  Or refrigerated boiled eggs ?

Think petri dish.  The product is a growth medium for cultures of friendly and dangerous bacteria.  Microbiologists talk about ” logs ” of micro loads.  This is short for “logarithmic” growth starting with “seed” populations.  Fresh cut fruit has taken longer to catch on due to the higher amount of sugar vis-a-vis vegetables.

Agricultural and Agri Food Canada ( AAFC ) for short usually picks up on listeria contamination in salad first.  No real surprize there.  The bags have a week to incubate in transport from California with greater chance of temperature abuse.

headspace analysis
Tracking headspace gases interpolates when the package will go anaerobic.  The biggest mistake in headspace analysis is not getting enough data.  Simply checking one or two packages every few days does not provide a true picture.  The right way is to sacrifice a lot of product, check several packages every day then graph the results after throwing out the highs and lows.

Think table with 3 legs which are the raw food, processing conditions and packaging.

raw material
This refers to either the animal or vegetable and how it was handled not just in transport to the processing facility. In the case of vegetables, it’s smart to look at conditions before the seed was put in the ground.  If manure was used to fertilize, Escherischia Coli has a way of finding it’s way into the processing plant as seed populations.  Avoiding cross contamination requires close attention to HACCP.

processing conditions
Before personnel set foot on the production floor, it is best practices to educate them about sanitation.  Seed populations of pathogens often enter the plant on the hands of employees.

packaging
Packaging cannot make an inferior product into an acceptable product.  OTR is key.  For meats, fish and cheese, a barrier is essential.  For fresh produce the proper barrier or lack thereof is the lynchpin.  A lot of emphasis is put on OTR.  An overlooked factor is the CO2 transmission rate – about four times the OTR.  So the highest OTR without spoiling prevents the dnagerous anaerobic CO2 buildup.

Temperature during transit is not a factor with pasteurized canned or bottled product.  Wines can be ruined in just a few hours in a hot car.  For fresh products, when measuring headspace it is important to mimic as closely as possible the anticipated temperatures in the ” cold chain”.  This can be a touchy subject.  Who wants to be the one who has to tell their customer spoilage is due to breaks in the cold chain at  the customer’s distribution hub ?  Besides, every Thermo King is at exactly 38 degrees F throughout the entire truck, right  ?   Sending the customer the impartial results from a Ryan often backfires.

I have seen several attempts to quantify the definition of shelf life by assigning a point value to each category adding up to a total of 100.  It never works.  If an item fails in any one of the criteria, it fails.

In the early 1800’s there were an estimated 15,000 stills in Kentucky.  Distilling whiskey was a very rational alternative to selling corn.  The reason: practically indefinite shelf life.

The most toxic substance on this planet is not man made.  It is produced by Clostridium botulinum to defend itself against other predatory micro organisms.   Botox anyone ?

Meals Ready to Eat, or MRE’s are expected to have a shelf life measured in years.  Exactly how long is time and temperature dependant.  If an MRE is puffy, you now know why it’s gone bad.  It has gone anaerobic.

It is estimated that 40% of food in undeveloped countries spoils en route to market.  In the US, consumers pitch about 40% of their food.  Neither one is good from a methane generation standpoint, but no matter.  It’s cool virtue signalling to demonize the plastic straw men.