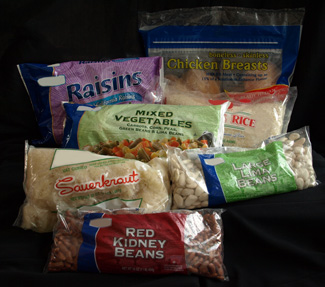 What is vertical form/fill/seal VFFS ?

Vertical form / fill / seal VFFS forms packages from flat rollstock by folding the film over a forming cone with an overlap, then sealing in the machine direction ( MD ) to create a tube. The tube is sealed in the transverse direction ( TD ), product is dropped in. Seal at the other end ( end seal ) starts the next cycle.

There are two types of sealing jaws:

Impulse Seal Jaws ( usually single layer film )
Used when barrier and pinhole-free packages are not critical. Plain or surface printed single (monolayer ) film is sealed inner layer to outer layer in the machine direction to create an “overlap” seal. The end seal is made with an “impulse” seal consisting of a heated wire covered with Teflon tape. Everyday examples include baby carrots, dry beans and cranberries.   Rice is a lanination of LDPE  / LDPE and runs on impulse jaws.

Resistance seal jaws ( laminated multilayer film or coex )
To make a “fin” seal, the inner surfaces of a 2 layer structure having different melting points are sealed together in a mirror image. The outer layer has a higher melting point than the inner “sealant” layer. The constant heat bare metal “resistance” end seal jaws penetrate the inner layer flow and caulk without distorting the outer layer which has higher heat resistance. A ubiquitous example is cereal box liner bag.

In either style, performance of the sealant layer is critical.

To calculate weight per 1,000 packages made with form/fill seal, see weights and measures. Whether your requirements are single layer or lamination, we can provide the right sealant layer film for your application.