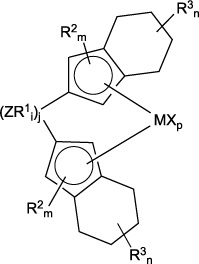 Metallocene plastics are plastics made by utilizing the catalyst metallocene.

Q. What is metallocene?
A. Metallocene is tiny particles of positively charged metal ions sandwiched between two rings of carbon atoms which have five atoms apiece. Also known as “single–site” catalysts, so named because they have one singe active site per catalyst particle, each identical from one particle to another.

Metallocene is a catalyst, not a monomer such as ethylene, propylene or vinyl acetate. Saying “just add more metallocene” is simplistic and does not mean the PE film will be stronger and seal with faster hot tack.

The metallocene catalyst enables the manufacture of resins with very pure, consistent and specific polymer chains.  There is very little what is called ” side chain junk” which occurs with previous generations of polyethylene. The molecules are more uniform as though they had been made with a cookie cutter.

We have evaluated dozens of metallocene polyethylenes with different personalities ranging from soft with low melting points and crispy with good heat resistance.

By blending different grades of metallocene resins with other LDPE resins, we tailor the film properties for precise performance requirements.  For example – by combining a very low density metallocene with LLDPE or LDPE,  fast hot tack is achieved.   A side benefit is an enhanced poly film which seals rapidly and can be downgauged because it is much stronger.  It is a common practice to blend metallocenes with other PE resins because it is pricey.  Most blown film extruders do not inventory premium metallocenes because the price of the resin is higher than their average selling price for film.

Metallocenes exhibiting fast hot tack have made EVA obsolete. Many metallocenes have been successfully substituted for Surlyn®.

The advent of metallocene is enabling polyethylene to go where no polyethylene has gone before, such as PVC replacement.