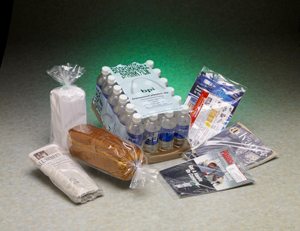 LDPE Film
LDPE film is an abbreviation for low density polyethylene film. The variety of Low Density Polyethylene (LDPE) film resins have evolved to match the myriad applications for specific large markets for LDPE films. What works for one application will not work for others. A few examples of resins which work only for specific LDPE plastic film applications are –  dry cleaner bags, bread bags, paper towel overwrap and shipping sacks.

LLDPE
Linear Low Density Polyethylene, or LLDPE resin, has gone through a proliferation of LLDPE film grades which have different properties since their introduction in the late 1970’s. LLDPE film resins are versatile, yet there is no one size fits all. For example, the strength and lower clarity of LLDPE do not make it the ideal candidate for heat shrink film.

Linear Low was originally touted as a cost reducer by virtue of it’s strength compared to LDPE and lower cost to manufacture. While some of these promises have come true, butene LLDPE makes for relatively weak film, especially if not processed in the right conditions.

There are other low density polyethylenes besides conventional LDPE and LLDPE.

EVA or PEVA
EVA is a mature film resin category. EVA is available as a copolymer PE resin for film resins in percentages ranging from 2% to 24%. Here are a few examples –  for light duty retail, a 2% EVA enhances clarity and sealability. Back in the day defined as the 1970’s, a 4% EVA was very popular for ice bags because it made good seals and held up in freezer temperatures. Very high percentages of EVA are still used when a low melting temperature is required.

The amount of vinyl acetate monomer ( “VA ” ) can skew the average density.  The more VA content, the higher the density.  The result is a resin with a personality of a much lower density ( lower melt point, lower secant modulus ).

Learn why you need to be specific about the percentage of EVA.

There are probably thousands of species in the genus of polyethylene film resins.  Each was developed to apply to a narrow band of applications.