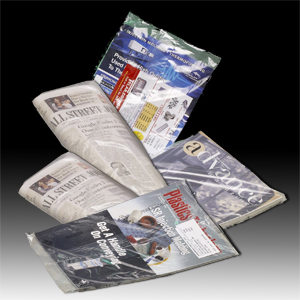 Manufacturers and mailers of flat-size mail must comply with USPS-T-3204 which went into effect February 4, 2007. In 2006, the USPS conducted a thorough study of automatable polywrap films to ensure compatability of automation flats with flats sequencing systems ( FSS ) and stand alone mail prep ( SAMP ) according to standards AFSM 100 and UFSM 1000.

In brief, the key properties of stiffness ( a/k/a secant modulus ), coefficient of friction (does not “block” ), anti-stat were defined according to the following standards:

Simply put, the USPS wants a clear polywrap film which:

1. Has a coefficient of friction ( COF ) measured with ASTM D 1894 which is not too slick, not too tacky and does not exhibit “blocking”.

Coefficient of Friction measures whether a surface is slick or tacky. The values have an inverse relationship. In other words, a higher number is tacky and a low number is slick. COF is measured both film-to-film and film to mirror finish stainless because stainless has higher surface energy. Film tends to cling, or “block” more to metal than film.
While the wide range of 0.20 to 0.45 film-to-film is within bounds, the optimum poly mailer film has a target COF of 0.33. It will stack well, yet open easily and not hang up on stainless steel surfaces. The COF for film on metal is called out as 0.45 maximum. There is no minimum, only a maximum value for film on metal.

Our time tested MAILWRAP film exceeds these requirements to achieve a mailpiece design which satisfies the requirements of the periodical wrapper and USPS.

We can even make automatable polywrap biodegradable for a small upcharge.